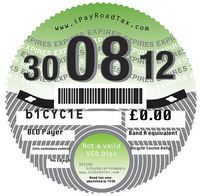 This one always tickles me pink when the first thing drivers say when complaining about cyclists is "I pay road tax and so should cyclists".

No one pays road tax. Road tax was abolished in 1937. But every working adult pays for the up keep of the roads.

The budget for the up keep of the roads is paid out of general taxes, and council tax. Although cyclists do absolutely no damage to road surfaces, and have the barest of concesions made to us in the way of cycle lanes, and of making the roads safe for us, we pay an equal amount to the up keep of our roads as any motorist does. And still we have to listen to the abuse from many motorists that we have no right to be on the road as we don't pay road tax.


What vehicle drivers pay is VED ( Vehicle Excise Duty). It's not a road tax, it's a car tax, a tax on vehicles with motors. - Yup, drivers are paying for the filth their vehicles give off. And whilst it is fair that all pay towards the up keep of the roads I doubt if any sensible person would think it fair that cyclists subsidise the pollution vehicles give off.

The other cry motorists give is, "why should we pay for cycle lanes". We, the cyclist already pay for the up keep of the roads and as road users and tax payers we are already entitled to cycle paths and have the right to ride safely on our roads. In fact it's very unfair that we have so few safe places to cycle as we pay as much towards the up keep of our roads as any motorist does.

Motorists may also be surprised to learn that the tarmac they so love wasn't spread on the UK's dirt roads for the benefit of cars. In fact, it was lobbying from 19th Century cyclists - who wanted smoother surfaces to ride along - which hastened the black-topping of Britain.

So you see how unfair and arrogant it is of motorists to continually cry cyclists should pay "road tax". Cyclists aren't interlopers on roads paid for by the motorist. It could be said that we the cyclist are subsidising the motorist.
Posted by Sandy at 00:05