Wales Gets Tough on Green Travel 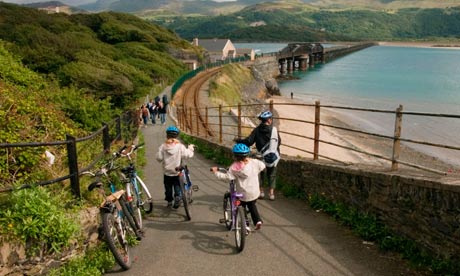 The trouble is that even if "proposes to make it compulsory" turns out to be "compulsory" it doesn't necessarily mean it will turn out to be a decent cycling infrastructure.  Painting a white line along main roads to create a cycle path doesn't stop vehicles parking in it and therefore making it more dangerous to attempt to use it.  Neither does it solve the problem of junctions and roundabouts.

My local area of Christchurch and through to Bournemouth has done amazingly well with using the pavements for cycling/pedestrian sharing in the areas where one barely ever comes across a pedestrian, along with putting cycle lanes on main roads where pavement use for cycling would be unwise.  But they still haven't done anything about roundabouts and junctions.  One still either has to take ones life in ones hands by cycling with the flow of traffic, cycle miles out of ones way to find a quieter route, or get off and push the bike as a pedestrian to make the crossing.

Getting off and pushing as a pedestrian is fine and simple, albeit once again forcing the cyclists to end up with a longer journey time wise, but that doesn't help when one uses a tricycle.  To push a tricycle through a pedestrian blocked pavement is in actual fact more risky when trying to avoid people with a wide tricycle than it would be to ride with the flow, and at the same speed, as and with the walkers.  But the law being what it is regarding cycling on pavements one has no other option.