I Break the Law

I don't break the law by jumping traffic lights, never have and never would.  I don't break the law or irritate drivers by hopping from pavement to road and back again, just because I don't want to be held up.  Neither would I go without lights or hi-viz in darkness or dull light.

I do however break the law by riding the pavements instead of the road.

On my 3 wheeled trike I am a very confident road user.  This is because I ride to the letter of the law on the road and motorists give me a wide berth and are very polite.  I believe this is because I am a older lady, because my trike is very wide and I give good hand signals and make good eye contact with drivers.

On a 2 wheeler however, I am simply not prepared to put myself at risk of death or even broken bones by being forced off the road or knocked off my bike by a metal weapon traveling at 50/60 mph plus.  Having broken 2 ribs a couple of years ago I know what broken bones feel like and it isn't pleasant.

The government want me to cycle and it's their responsibility to make cycling safe for me.

My local council here in Christchurch, Dorset, are spending money allocated to cycling infrastructure on nothing more than making pavements shared use, where it suits them, on one side of any particular road.  In other words they are paying lip service to becoming part of Britain's Cycling Ways.

Don't get me wrong, because this is a semi rural area our pavements here in my particular part of what still comes under the borough of Christchurch are barely used by a pedestrian, due to the fact that everyone is far too lazy to use their own two legs instead of getting the car out.   The shared use doesn't inconvenience pedestrians so I can fully see why a lazy council has chosen this way to be able to say that they are trying for a cycling town.

Basically the council's idea of a bike path has been to paint a white line along the kerb side of the pavement, and every few yards stick a blue sign representing shared use.

Unfortunately, what the council haven't taken into consideration is the fact that the pavements are barely wide enough for two people walking side by side, let alone cycles passing each other or maybe having to pass the odd pedestrian.  They are in very poor condition and in many places overgrown on the side.  At every side road we have to give in to traffic just as a pedestrian does,  and for some reason at my home, incoming, end of the path the shared use stops dead a mile or so before one even starts to enter the village where one might come across pedestrians using the row of shops, and one has to then join a very fast through road with vehicles traveling up to 60 mph.

On the outgoing ending of the "bike path" one comes to a pedestrian/cycle passover which safely takes us up and over the busy duel carriage way and large roundabout.  The downside of this passover is that cyclists have to dismount and walk across, so Sustrans might give their name to this over pass as part of the cycling pathways of Britain, but it is not a cycle pathway, it's a pedestrian pathway only. 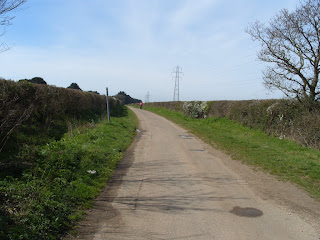 Once over the walkway one then has to turn off and take country lanes (no pedestrian paths) if one is to avoid joining the bypass and speeding traffic.   Country lanes I might add that are also used by many cars cutting through from the more rural parts of this borough.  Country lanes that are only wide enough for one car in one direction and therefore have to pull in for each other to pass.  And believe me, country lane motorists do not drive slowly.

The government are lax in creating safe cycling for me and my local council are not caring if the cycling facilities they supply are barely usable as long as they can say they have put in ex amount of miles of cycling facilities.  I have therefore decided to make my own law.

For all the faults of using pavements as part of the cycling infrastructure, it is still safer than cycling on roads with speeding traffic.

I am of course at all times aware of my being a guest in a pedestrian's area, and cycle very safely and carefully near them.

The local council can't have it both ways.  They can't say pavement cycling is safe with one breath and then expect me to not use a pavement simply because they haven't put a white line or blue cycling sign up.

If this means I break the law then so be it.  If I specifically see a no cycling sign I will obey, but no sign and I will assume it is fine for me to cycle there.

The government refuse to create safe segregated cycling and it's my right as a human being to be safe traveling from A to B.  I have the choice of sharing the road with motorists that are hell bent on removing cycles from the road, or I can share the pavements with pedestrians.

I choose to break the law and cycle on the pavements.