Back to the Rolls Royce

Well, not really.  I really mean I took out my tricycle today again instead of my fold up.  I think of my trike as the Rolls Royce of bikes because, she is comfortable and roomy, she gives me a nice wide seat, has a large boot to carry a cart load of junk, and she is safe and sturdy.  I can even drink my tea and have my lunch on her if I want to.

I got up this morning and really felt I needed to ignore the housework and just get out for a couple of hours.  So with a flask of tea and a bottle of water, I set off with no idea of where I was going or how long I would be out.

Once out I turned south towards the beach rather than north towards the main traffic through the village/town area.  From there my only choice was to follow the road around east.  A very quiet residential road.  Would be an even better cycle route if 20mph and could quite easily be turned into a one way for motorised traffic without upsetting the flow around the town or visitors to the beach.

Half a mile later and the road bore right and linked up with the fast main through road.  This is where I do my illegal pavement cycling on a pavement where one simply never passes a pedestrian.

I plodded along this pavement at 5mph (just in case) for another half mile until I turned into the Highcliffe Castle grounds.  I had only discovered a couple of weeks ago that at the back of the castle grounds there is a gate open from 7am to 10pm that leads one into Steamers Point.  Not having lived in this area for long I had no idea before that this entrance existed.

This is a beautiful wooded area I would say just over a mile long.  I never looked to see how far it was as I travelled through.

This brought me out at the end (or beginning) of a very quiet road and onto the beach promenade going in both directions.  Sadly I was unable to join this as I came across a massive path painted "No Cycling" sign along the prom to the right, although cycling was allowed to the left.

Now if I had been on my fold up bike I could have walked the short way along the promenade until the no cycling bylaw finished.  But pushing a trike is no fun, so I turned to look up on the map my other options.   There were many small dead end roads coming off of the road that I was now standing in and my only choice as I could see at that point was to cycle up, around, and pick up another B road to take me around the no cycling promenade.  Approximately 3 times longer journey than walking along the prom.  No signs to show an alternative route.  Cyclists are on their own.  If you don't have a map your are buggered. 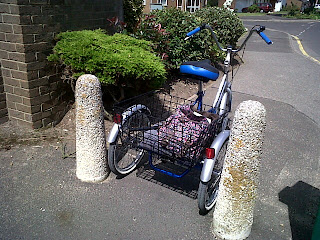 A small side note:  As I said cycling is allowed along the prom to the left, but as you can see by the image on the right these barriers, that they are fond of erecting in the UK, haven't had trikes taken into consideration.  Now, my trike is a small (child to small adult) one (20") so I could just about fit through, but the the 24" full adult trike is very much wider and would not fit through.  For someone with a 24" trike, purely by their size they would have been barred from cycling along the prom where allowed.

The gap through these particular barrier is actually larger than usual.   I have come across many of them, along with staggered railings/gates that stop me from accessing many paths when out on my trike.  Hence one of the reasons that I have started to learn to ride a two wheeler.

After a long detour and many looks at the map, I finally ended up at the other end of the no cycling promenade and onto Avon Beach promenade where cycling is allowed.  One has to cycle pretty slowly through here because on a lovely day, as it was today, there are many pedestrians also sharing the area.

At the other end one then ends up on Mudeford Quay and another "No Cycling" sign that forces one then to join the motorised vehicles through the very large and busy car park, following the traffic around until one ends up on the actual Quay.

Mudeford is a really beautiful place to visit.  One can jump on a ferry for a tour around the Isle of Wight Needles, or nip across to Hengistbury Head, where from there, there is more off road cycling, or one can stand fishing or crabbing.

I have cycled to Mudeford many times from where I previously lived but this is my first time finding my way from my home now, trying to use as many off road ways as possible.

Here I stopped for a cup of tea and a ciggie along with a pleasant chat with a couple of visitors to the area.  It was also here that I realised that I hadn't thought to pack a snack or lunch, so after a pleasant rest I made my way back home. 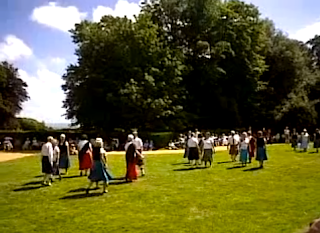 On the way back on entering the Highcliffe Castle grounds again I found them to be having a Scottish Dancing afternoon.

I simply had to stay there for a while watching them.  It brought back memories of when as a child I was in the school country dance team.

For me this was a lovely end to a perfect ride out.

After watching the dancing I decided to cycle back along the beach path which one can get to through the castle grounds, rather than make the final mile home by road.

On looking at the time when arriving back home I saw that I had been out nearly 4 hours.  Starving hungry and ready for a nice cup of tea.

Two negatives on this ride:

At one point I was cycling down a lane with no pavements and only wide enough for 1 and a half cars.  The sort of lane that one car has to pull in tight to the hedge rows to allow a car coming through to pass.

I suddenly found from around a dangerously tight, blind corner a car heading straight towards me at top speed.  One second the road had been clear and in the blink of an eyelid he had been there, which shows how fast he was travelling. He managed to screech to a halt 3ft from me.

It's for this reason that the national speed limit of 60mph is ridiculous on our country lanes.

The other negative is actually hilarious.  I had stopped to get my bearings when coming across a "No Cycling" sign and a car park, looking around the car park to see which would be the shortest way following the arrows to get me onto the Quay.  An old man sitting on the wall having a ciggie, said to me "You are looking a bit lost".  I then told him my predicament.  His attitude changed dramatically and very aggressively and with a sneer, he said "There should be no cycling anywhere".

I actually laughed in his face and just rode off.  I wasn't going to banter words with an idiot.
Posted by Sandy at 21:38